Menu
Log in
Register
You are using an out of date browser. It may not display this or other websites correctly.
You should upgrade or use an alternative browser.

Hey all. Wrote to thunder first, he said it might be doable. So now we need to discuss it. Is it a good idea? What are the best variations?

Basically, the idea is twofold:
1. Change rotation (gametypes), according to time of day;
2. Change based on number of players.

Smokva said this morning some old time players wanted other gametypes? But others dont want to. Or we have too less players atm. Maybe it's possible to get the best of both worlds?

Benefits:
1. Player will come to know that at that exact time this will happen. Want to play SD - come at that hour, and you will find people who wants to play sd. Some for other gamytpes.
2. At hours we are struggling, server will be more alive, since DM is faster gametype.

Benefits:
1. We wont mess up times. Sometimes server stars earlier. Sometimes later. Hence always suitable gametype will be with apriopriate number of players. Like for weekends, it's different hours than weekdays. But players wont know exact times, when to expect certain gametypes.


So, what you think guys? Server needs some changes. Until we get more members in section, we cant realistically expect 2-3 players shoulder it all. So this might really help. We need to hammer it out, what makes sense and what doesnt, before we go to thunder.

Another not so good day for server. Practically no members, including me, played today. War earlier in the day, also saw guarnere for a bit. Dont know about morning. Not more than 5vs5. Mostly 3vs3.

So pls discuss this, we need some new approaches.

Banrighted
Its not a bad idea dun rota but hard to realise .. someone have to do this ... and yea - not all like tdm all over time (including me) so lets wait for a @Warnaar80[NL] if he can do it

Staff member
Retired Admin
Donator
Was looking in to it. I like the idea (if its possible, i can't do it...) but its all about players. Was setting up new rota, more mixed, but 3vs3 ctf dawnville or sd carentan idk.
So if its possible i would say yes!

Retired Admin
That's a great idea if it can be realized indeed! Is there anyone who is able to implement this?

Warnaar80[NL] said:
Was looking in to it. I like the idea (if its possible, i can't do it...) but its all about players. Was setting up new rota, more mixed, but 3vs3 ctf dawnville or sd carentan idk.
So if its possible i would say yes!

I like this rotation. Just scared that not enough people.

About dynamic. You saw what thunder wrote: "it's possible i think, not sure though". Hence was encouraged enough to start this discussion

Idk how server sets up rota. Thunder does it manually everytime u send him? Like in server accepts text file with a message like that? Maybe it's possible then to write loader program to switch those files with different rota at predetermined times? How long it takes for rota changes to take affect? Will it break anything? At some point thunder will need to weigh in. I think #1 is simpler, it's only based on time. Second has it's pluses, but it's more complex, u need to calculate number of players at any given time in addition to loading rota.

If it's possible, then we need to decide on these things:
1. Change times. At what times should new rota begin and end.
2. How many such rota changes? 2-3? Night time, morning, afternoon/starting server, dieying server time/peak time
3. What exactly is in rota? What rota in peak time, what in dead of night?
Anything else i'm leaving out?

Also, if we find it's doable, why not try DM gametype? In the night, morning, early day server is dead anyways, so i dont see no harm done to try DM.
Last edited: Nov 5, 2014

Sorry but if admin (Warnaar in that case or even Skipper) will have to possibility to change the game type as a comnd? off if it's possible...

Or in cod2 we can let the players to vote for the map????? might help?

Very much agree. And maybe until server gets up on it's feet, mixed could be pushed up a few hours later?
Oh how i wish for this to come true Hope thunder will not dash our hopes

Staff member
Retired Admin
What ever the majority of players want is what it should be. The population of the server is still all that matters at this point in time.

I don't really know much about CoD servers but I found a plugin called "RotationManager". With this it's possible to change the rotation based on the number of players - it says. Maybe this can help.

Banrighted
I would push mixed earlier not later. Tdm is getting ppl bored nowadays

Smokva said:
I would push mixed earlier not later. Tdm is getting ppl bored nowadays
Click to expand...

Server has just started by 5pm (gmt+2). And if it doesnt die out an hour or two later, it picks up players after 7-8pm. So i dont see much point lowering it. But maybe we should try mixed soon? Although i dont really see people talking about rota. Even rumblings about carentan stopped. Older player complain a bit? Prob, bc they are the only ones who remember how this server used to be

Server rank 117th as of today. Fall arrested for now on account of @Sammy playing his ass off

Banrighted
Look, the server is running for 2 months now. We already showed ppl that we are here and now we have to step up and offer something more. Mixed rota is the only thing that we can do without going against the philosophy of JFF (no mods, no voting etc.)
Stop playing again and we will drop to 200 (again) so we really have nothing to loose.

@Thunder Now would be really great if you could give us any indication of what's possible to do.

Btw, can somebody guess then @Sammy started playing cod2?

Or when smokva started playing? 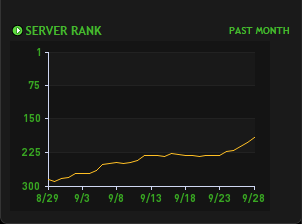 Or when i started playing? 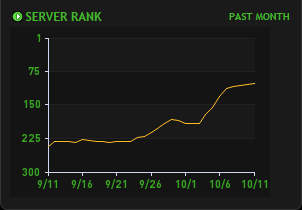 So that's what the need the most. Sure, all this tinkering is helps. But we need playing members. And if this dynamic rota turns out to be possible, i dont know what else can be done.
Last edited: Nov 8, 2014

Btw, found some rules on gametracker:

Cases we may block, delete, or derank servers:
1) The server runs more than 3 fake players.
2) The server owner is repeatedly abusing the page management features.